TWO SELF CATERING ACCOMMODATION
COTTAGES IN THE DORDOGNE 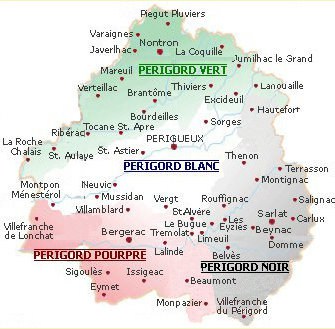 December
3
Karen Carter
News
Comments Off on LES CHOUETTES – THE FRENCH COUNTRY COTTAGE IS SITUATED IN THE PE’RIGORD NOIR OR THE BLACK PE’RIGORD.

THE PE’RIGORD IS DIVIDED INTO 4 REGIONS:

The White Pe’rigord gets its name from the chalky soils and white local stone. In the centre is the capital – Pe’rigueux – Two thousand years of history is encapsulated in the ancient city of the goddess Vesunna

The Purple Pe’rigordin the south-west which feature many vineyards and bastide villages – Bergerac, Montbazillac and Pe’charmant .

The Black Pe’rigord in the south-east is recognised worldwide for its wealth of prehistoric remains. The Ve’ze’re valley is home to some of the richest sites in Europe for vestiges of Palaeolithic occupation, caves and natural rock shelters. The Dordogne river meanders between the impressive limestone cliffs and oak forests. This is where you will find Les Chouettes The French Country Cottage.

Any cookies that may not be particularly necessary for the website to function and is used specifically to collect user personal data via analytics, ads, other embedded contents are termed as non-necessary cookies. It is mandatory to procure user consent prior to running these cookies on your website.